A handheld railgun, which uses electricity rather than gunpowder to propel ammunition, is being sold in the US for the first time.

L.A.-based Arcflash Labs is accepting preorders for the GR-1 Anvil, available online for $3,375.

That includes the 20-pound rifle, a battery pack and a hard carrying case, though ammo and a charger are sold separately.

The coils in a coilgun attract a ferromagnetic projectile down the barrel, accelerating it to ultra-high speeds: According to its specs, the Anvil is capable of accelerating a projectile up to 200-plus feet per second.

There’s about a six-month wait for orders, according to the site but buyers must also sign a full liability waiver prior to shipment.

The GR-1 Anvil from Arcflash Labs is an 8-stage semi-automatic high-voltage Gauss Rifle, billed as the world’s first handheld coilgun. The weapon uses electricity, rather than gunpowder, to accelerate a projectile down the barrel

The Anvil generates muzzle energy – the energy of the projectile as it leaves the barrel – of around 85 joules, according to New Scientist, comparable to high-end air rifles ‘or about half the power of a .22 caliber rifle.’

That non-lethality is a selling point, according to Arcflash co-founder David Wirth, who started the company with Jason Murray, a fellow aerospace engineer and former Air Force officer.

‘The scalable effects of a Gauss rifle would allow law enforcement to fire rubber bullets at a speed proportional to their distance to target, so they’re less likely to injure someone if they’re close and more likely to reach the intended target if they’re far away,’ Wirth told New Scientist.

Animal control experts could also use a coilgun to more efficiently and safely fire tranquilizer darts.

The $3,375 price tag includes the rifle, a battery pack and a hard carrying case. Ferromagnetic ammo and a charger are sold separately

While any steel rod with a diameter of under a half-inch could be used as ammo, Arcflash recommends its three standard projectiles— 32 mm, 42 mm, and 52 mm—and maintains it’s not responsible for ‘for damage to the unit or personal injury’ caused by firing non-standard ammo.

Is the ANVIL the semi-automatic or Uzi of the future? Not just yet, say experts. 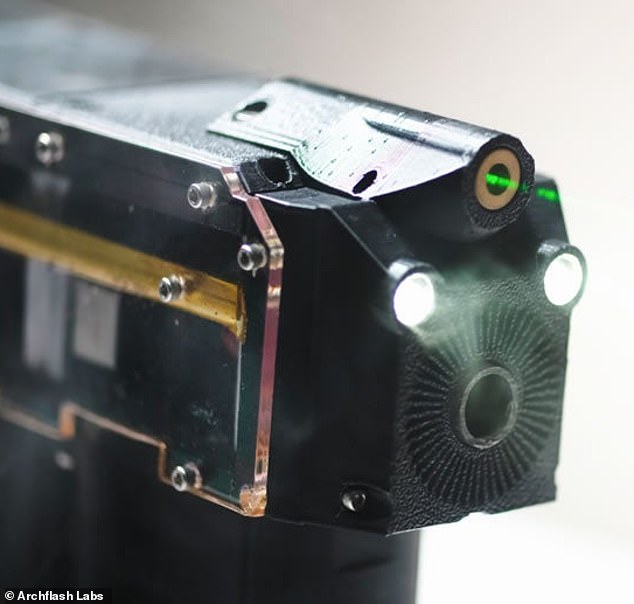 The Anvil’s muzzle energy is comparable to high-end air rifles, or about half the power of a .22 caliber rifle. The impact is equivalent to that of a .22 short bullet, used in Olympic events and to hunt small game like rabbits

‘If your prior exposure to Gauss rifles comes from laying waste to your video enemies in the Fallout series… you may be slightly underwhelmed by the power of the real thing,’ reported Field & Stream.

‘Nevertheless, early firearms weren’t that deadly either, and look where we are now.’

The hunting enthusiast site compares the impact from an Anvil projectile to a .22 short bullet, used in Olympic events and to hunt small game like rabbits.

‘It is far more powerful than Arcflash Labs’ earlier gun,’ Field & Stream adds, ‘which had about the same punch as a Daisy Red Ryder [BB gun].’

While the Anvil is handheld, militaries around the world have been interested in larger-scale railguns that could fire massive projectiles faster than the speed of sound to devastating effect.

Railguns have the capability of accelerating a projectile to Mach 6, equivalent to 5,400 miles an hour.

China expects to unveil a super-sized electromagnetic railgun on naval ships as soon as 2025. 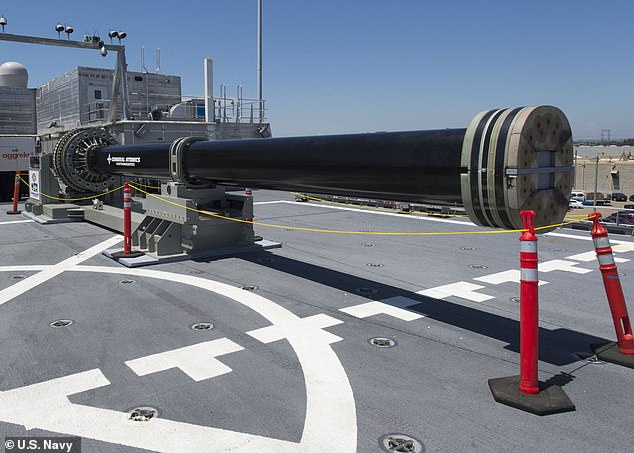 Pictured: One of two electromagnetic railgun prototypes on display aboard joint high speed vessel USS Millinocket at Naval Base San Diego on July 8, 2014. For now, the Navy is suspending its railgun program

In July, the U.S. Navy announced it was pulling the plug on an electromagnetic railgun program it had spent more than 15 years and $500 million developing and even considered mounting on a warship.

But the mammoth weapon’s limited range (about 110 miles) and frequent need for repairs made it impractical.

CHRIS FOY: The lighter touch in which games are being refereed pay off on the opening weekend

”I will always be God’s special daughter”- Interior designer Ehi...